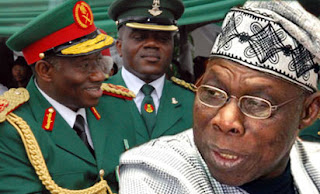 Chief Olusegun Obasanjo, aka OBJ, Former president of Nigeria,  yesterday, broke his silence on the feud between him and his estranged political son, President Goodluck Jonathan, saying he would not stop commenting on national issues.


Obasanjo stated this when he hosted the National Chairman of the ruling Peoples Democratic Party (PDP), Alhaji Bamanga Tukur, in his Hilltop country home, Abeokuta, Ogun State capital.
He, however, said that despite the public perception on the disagreement between them, Jonathan remained his president.
The former president said that: “If there is anything that requires my own comment, position or views. I will say it. It is only when you kill me that I will stop doing so. It is my passion, patriotism and love that will continue to make me say my own. If it is the party that I see that something is inimical to the growth, I will talk.”
Posted by Okoawo BlueGate at 3:12 AM