A Woman Gave Birth To a Horse During Church Service. 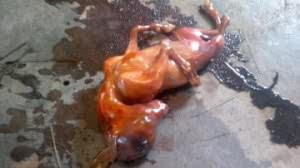 Members of World Liberation Ministry, Along Benin/ Sapele Road, Benin City, were thrown into confusion and shock Benin, the Edo State capital were shocked when, during church service a woman gave birth to a horse.

The General Overseer of the Church, Evangelist Silva Wealth, told reporters that "the Lord has revealed to me during the prayers session that there was a woman (Name withheld) with an issue and that something was blocking her womb. As the prayers intensified, the woman started screaming and bleeding started when the object came out.
"I cannot touch it and that was why I don't know if the horse was already dead or not. I can't describe the object. We have seen people that vomited several things during our service but not this type of thing.
God has been blessing our ministry with prophesies and miracles, "he said.
Posted by Okoawo BlueGate at 4:32 AM

We Love To Hear From You.