Danger Of Firecrackers: 9 Building In Flame, One Dead 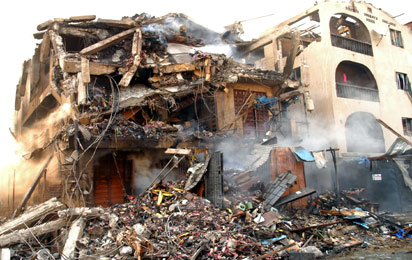 A three-storey building located at 45 Ojo Giwa Street, Idumagbo area of Lagos Island Local Government, Lagos State where firecrackers were stockpiled by a trader, went up in flames at 9:30 am, destroying nine other buildings within 60 metres radius


One person was burnt to death and over 40 persons injured
The South West information officer of the National Emergency Management Agency, (NEMA), Mr. Ibrahim Farinloye, confirmed that one unidentified person was burnt to death by the raging fire and 40 pesons sustained injury.
He said: “The body has been deposited at the Lagos State General Hospital on the Island.”
The fire also razed over seven vehicles, including those with Number Plates: PK 788 KJA, LG 140 LSR, CG 190 APP. They were parked on the street by the traders and their customers.
The building has been completely brought down.
Posted by Okoawo BlueGate at 9:17 PM